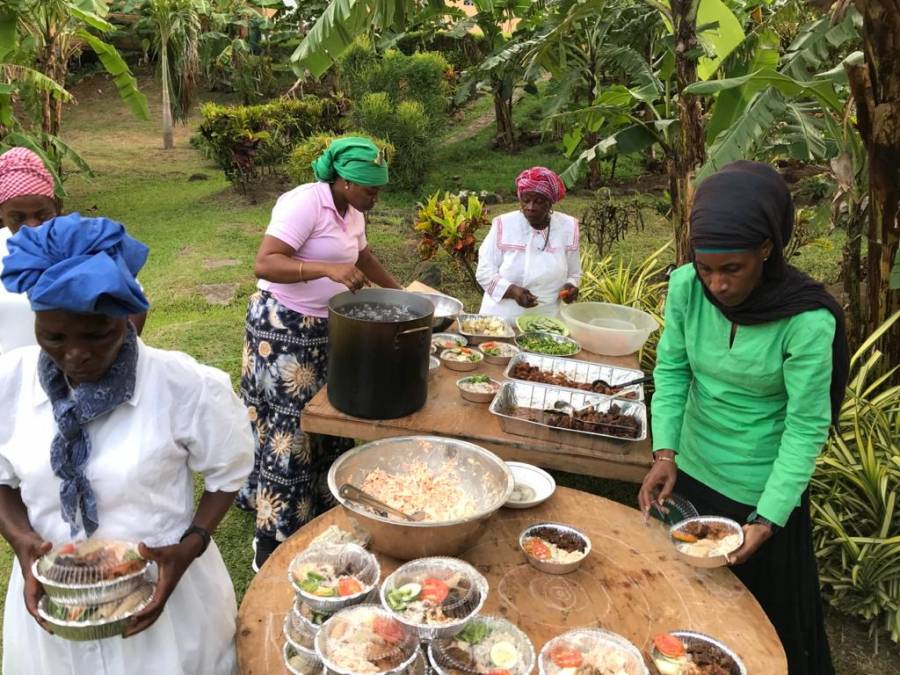 Feeding the village forms major aspect of Ifa festival in 2020

Feeding the village forms major aspect of Ifa festival in 2020

This story was posted 2 years ago
in Arts/Culture/Entertainment, Community, General News
3 min. read

Members of the Shrine of the Seven Wonders of Africa, packaging meals to be distributed through various communities
Share

Following a stellar execution of the Ifa festival for the last 2 years, Covid-19 this year has seen a major scale-down of the festival in keeping with physical distancing protocol mandated by the Ministry of Health.

The Ifa festival can be traced back to the West African spiritual tradition of the Yoruba people, which for hundreds of years honoured a pantheon of deities called Orishas which are representations of the elements of nature.

“We were looking forward to this year, it would have been our year of growth because of the number of people who indicated that they will be here so in a way it was a bit disappointing but at the same time we have to keep on with the work for the ancestors,” said Yvonne Drake, Head Priestess Iya Ifatooki, of the Shrine of the Seven Wonders of Africa.

Nevertheless, organisers were able to successfully execute this year’s festival by paying particular attention to catering to the needs of impoverished communities. Despite scaling down this year’s festival due to Covid-19, major emphasis was not only placed on the spiritual aspect but also undertook a major charity initiative in a time of financial hardship by providing hot meals to communities.

In Grenada, the spiritual practice of Ifa was revived by Priestess Iya Ifatooki who has spent over 20 years in Toronto Canada spearheading a charity ministry which provided meals to the homeless on the streets. The organisation spent much of the festival preparing, packaging and distributing meals as part of giving back. Adopted Communities such as Pearls, St Andrew benefited from such an initiative together with other communities such as St Pauls and St David. Over 400 meals were distributed to the various communities especially to the children, during that period of the festival. Being self funded, a festival of this nature can cost upwards of EC$10,000.

According to the Ifa tradition, it is required that initiates first ask for clearance and approval from Esu, known as a messenger between heaven and earth, before they can be engaged in the feeding of the village. Once that is complete organisers started preparing the various meals. For example on Tuesday, 14 July 2020, in preparation of distribution of the food, red wine was poured onto the mutton in recognition of the Orisha Shango which was honoured that day. Once that was complete everyone involved in the cooking must be involved in the sharing of the meal and it is imperative that food must not touch the ground until everyone has played their part in this distribution.

“Based on tradition, once the first person starts taking out the food, the food must not be put down because it is a chain of command that must not be broken. It is also necessary since each person touches and blesses the food because this is part of them giving back,” said Drakes.

The Shrine of the Seven Wonders of Africa located in Corinth, St David is looking at making its charity efforts a monthly activity.

NOW Grenada is not responsible for the opinions, statements or media content presented by contributors. In case of abuse, click here to report.
Tags: coronaviruscovid-19curlan campbellfeeding the villageifa festivalIya Ifatookiorishasseven wonders of africayorubayoruba traditionyvonne drake
Next Post

A people majoring in minors