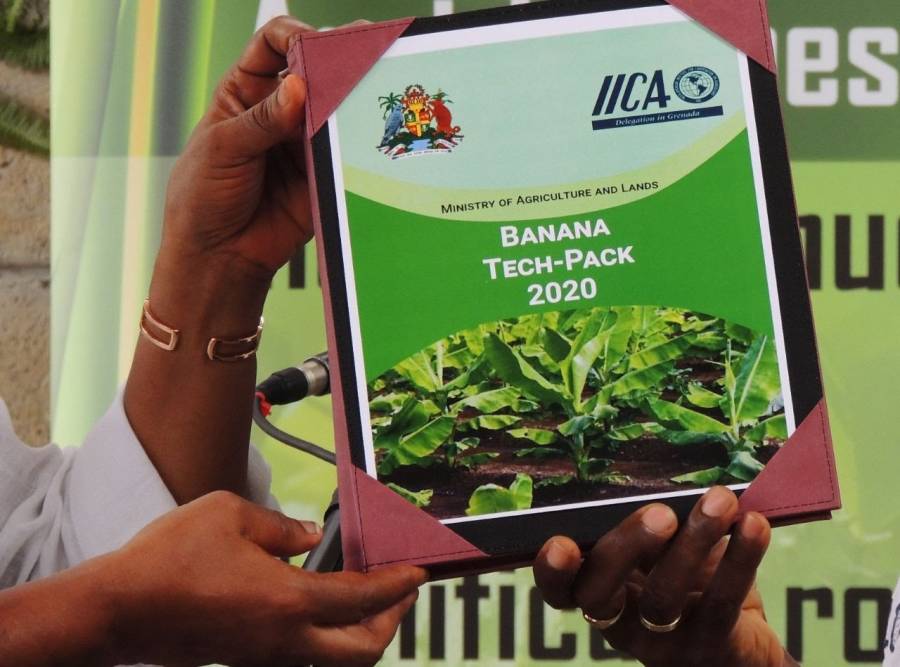 The Ministry of Agriculture and Lands of Grenada was the recipient of a Banana Tech-Pack which was developed by Inter-American Institute for Cooperation on Agriculture (IICA).

The plan provides labour support, planting materials and other input supplies to commercial farmers, in order to assist them in the production of targeted crops.

The Banana Tech-Pack was developed by IICA specifically for this pilot project, due consideration was given to the farming practices essential for the productivity and sustainability of banana farms.

Green bananas are a staple vegetable in Grenada and were targeted for increased production in the Ministry of Agriculture and Lands “Covid-19 National Food Security and Mitigation Response Plan”.

The Banana Tech-Pack was handed over to Minister for Agriculture and Lands, Yolande Bain-Horsford, by IICA’s National Specialist Derek Charles, during the ministry’s opening ceremony of its 2020 Plant Distribution Season, which was held at the Mirabeau Propagating Station in St Andrew on 14 July.

Banana plants were issued to 14 medium size farmers who have been selected to participate in the pilot project, which success will be the determining factor as to whether the project is extended to other farmers.

The plan advises and recommends on pest and disease control, follower setting, and the timing of applications of key banana inputs including irrigation. Illustrations of some of the key banana production practices are also included in the Tech-Pack.

Hard copies of the Tech-Pack will be available to banana farmers and this will be supplemented by on-farm training sessions periodically, to ensure that the farmers understand and practice the essentials for banana production, in support of the resuscitation of the banana industry in Grenada.

The advent of Covid-19 heightened the need for food security and the Ministry of Agriculture developed a pilot project to evaluate the production of bananas at different agro-ecological zones using tissue culture plants of the Williams variety.

NOW Grenada is not responsible for the opinions, statements or media content presented by contributors. In case of abuse, click here to report.
Tags: bananacoronaviruscovid-19derek charlesfood security and mitigation response planiicainter-american institute for cooperation on agriculturetech-pack
Next Post