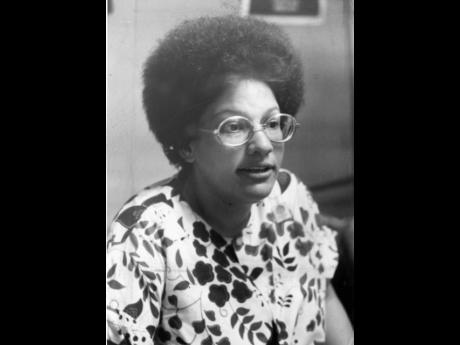 On the occasion of her death in September 2020

This story was posted 2 years ago
in History, OPINION/COMMENTARY, Politics
9 min. read

She has been remembered as a champion of the rights of women and children for the work that she organised and collectively implemented in Grenada during the Grenada Revolution (1979 – 1983) led by Maurice Bishop. Two reports in e-newspapers in Grenada and Barbados (The New Today, 6 September 2020, and Barbados Today, 6 September 2020) commenting on her life and death, contain statements that need to be put in context so as to help readers avoid misunderstandings. Journalists should explain context and evidence in the interests of accurate and truthful reporting.

These and other newspapers simply state, without providing accurate historical context, that Phyllis Coard ‘was convicted for the 1983 murder of Marxist Prime Minister Maurice Bishop’. To establish accuracy and truth, this statement must be followed by explaining the nature and circumstances of this conviction of Phyllis Coard, together with the convictions of the other members of the group that came to be known as ‘The Grenada 17’. The historical case is that the convictions were imposed by a court that was unconstitutional in structure, and that showed itself to be highly prejudiced against the 17 people put on trial.

Between 1990 and 2014 there have been many analyses of the serious injustices against the Grenada 17 perpetrated by the flawed, irregular and prejudicial trial conducted by this court. Such analyses of the process were put forward by internationally respected authorities including Amnesty International, the UK High Court, former US Attorney General Ramsey Clarke, and others. When newspaper reporters fail to mention any of this, the context is hidden, and this baselessly implies ‘guilt’ to Phyllis Coard and the others to whom they refer.

We therefore in the following statement counter this implication by providing for readers a reminder of key historical factors in this case.

The court that tried the ‘Grenada 17’ was allowed to try the defendants as a “court of necessity” presided over by a judge for hire with no independent tenure. The selection of the jury was also highly irregular. In the appendix below, we quote extracts from an affidavit sworn to and signed in October 1997 by Ramsey Clark, former Attorney General of the USA. In this affidavit, Ramsey Clark attests that the trial: ‘was held by a group of attorneys and judges appointed and paid for by the United States’, and ‘was not presided over by any constitutional court of other tribunal of the island of Grenada.’ The affidavit also attests that the jury was chosen ‘by a person appointed by the prosecution after the illegal removal of the registrar, who was normally charged with this duty’.

The convictions imposed by this court led to the perpetration of a grave injustice, the sentencing of 14 of the ‘Grenada 17’, including Phyllis Coard, to execution. Later, the sentences were commuted to life imprisonment. Ramsey Clark states that: “…from my review of the record, there was no credible evidence that the members of the Central Committee of the New Jewel Movement ever ordered or even had the opportunity to order the murders of which they were found guilty.”

The convictions and sentences were based on evidence that was unsupported, as highlighted in the Amnesty International report. The records show that this evidence was largely provided by a single person, Cletus St Paul. The e-newspaper articles referred to above both state it thus: “His key evidence was that the CC members held a meeting on Fort Frederick, which is overlooking Fort George, and voted overwhelmingly for the execution after Bishop was recaptured within hours of supporters storming his official residence at Mt Wheldale and freed him from house arrest.”The context needed for readers to understand the case is that this ‘evidence’ was shown to be false. We know this because a number of witnesses gave sworn affidavits in relation to the time in question. From these affidavits, it is clear St Paul was not physically present at Fort Fredrick when the Central Committee arrived. St Paul arrived about one and a half hours later, as a prisoner, with an army unit from Calivigny.

St Paul was arrested days earlier for his part in spreading an untruthful rumour about Phyllis and Bernard Coard, that they were plotting to kill Prime Minister Maurice Bishop. Prime Minister Maurice Bishop was also implicated in the rumour, which is why he was detained in his own home. As a consequence, Phyllis and Bernard were also advised to stay in their own home, as their lives were thought to be under threat.

This malicious rumour was being investigated from the afternoon of 12 October 1983, but the damaging nature of it divided the party and nation. In just one week it led to further rumours, much public unrest, large demonstrations and the eventual tragedy that occurred on 19 October. This was despite an ongoing investigation, with independent attempts at mediation taking place.

Witnesses confirmed St Paul was handcuffed and seated a considerable distance from the entrance of Fort Frederick. One of these witnesses was on the list to give evidence at the original trial, but he was not called. His evidence, and that of others, would have shown that St Paul was lying. St Paul was not a credible witness. His evidence was uncorroborated. One of the judges was reported to have said that without St Paul’s evidence there could be no convictions.

Records show that the defendants were denied access to documents that were essential for their defence, including the log for Fort Frederick which would have proved that Cletus St Paul was not present when he claimed he was.

It is on this false evidence that Phyllis Coard and 13 others were convicted and sentenced to hang. The false evidence was also used to convict the other 3 defendants, soldiers who were given sentences of between 30 and 45 years each. The subsequent appeal process was fraught with irregularities, and many of the documents that would normally be made available for the defence were not forthcoming from the government. Despite the appeal judges negotiating an extra fee of US$650,000 their written judgement justifying the upholding of all of the convictions has, to this day, never been published.

It is not surprising that Amnesty International in its report on the legal process involving the Grenada 17 concluded that their trial was fatally flawed and did not meet international standards. Amnesty’s position was subsequently accepted by the UK High Court in a 2014 case involving one of the 17, Selwyn Strachan, who was being denied access to a legal training course by the Law Society, which alleged that he was an unfit person because of his ‘criminal record’. Quoting extensively from the Amnesty International report in his judgement, the judge indicated that it was wrong to conclude that Strachan was unfit because of a trial in which ‘the appellant’s convictions did not accord with a proper application of the rule of law’. As a result, Strachan had the right ‘to pursue the Legal Practice Course in the United Kingdom, so as to pave the way for his admission as an Attorney-at-Law in the jurisdiction of Grenada’ (see NOW Grenada, 30 June 2014).

The sentences of execution were later commuted to life imprisonment. Phyllis Coard, suffering from cancer, was temporarily discharged for medical treatment and returned to Jamaica, her country of birth. This was in 2000, after almost 17 years of imprisonment. The other 16 defendants were released between 2006 and 2009, after spending 23 to almost 26 years in prison, of which the first 8 years were spent in solitary confinement, on death row.

The sentences and the abusive imprisonment meted out to the Grenada 17 clearly represent historic injustice. Their imprisonment was marked by years of physical and mental torture. This adversely affected the lives of all of them and their families. Some, including Phyllis and Bernard Coard, had young children from whom they were separated.

It should be noted that the years of abusive treatment in prison only ended with the appointment of a new prison Commissioner, Winston Courtney, in 1991. After this, some of the 17, including Phyllis, used their talents to organise and teach an excellent programme of education that was utilised by many other prisoners – from those starting with adult literacy to those studying in external college and university degree programmes.

The imprisoned 17, during the period of revolutionary change that they and others led in Grenada, had designed, launched and implemented far-reaching social and economic reforms from which Grenadians still benefit today. Phyllis Coard was part of this process, playing a leading role as a champion for the rights of women and children in Grenada.

We feel that it is cruel for the journalists in question to add insult to injury by their carelessly incorrect statements that conclude the articles in ‘The New Today’ and ‘Barbados Today’. The late Phyllis Coard was not from ‘a wealthy Jamaican family’ as these newspapers state. She was from a family with a middle-class socio-economic status similar to that of the Grenadian family of her husband Bernard Coard. Her parents were not owners of the means of production. Both of them worked for salaries, her father Frederick Evans as an accountant, and her mother Sybil Wilson Evans as a bookkeeper. Phyllis was not ‘heir to the Tia Maria coffee liqueur brand’ as the reports state. Her uncle established that business, and she inherited none of the proceeds; in fact, he left his money to a Catholic church project in Jamaica.

It is time for newspaper reporters to stop unjustly misrepresenting the tragic events in Grenada that led to decades of imprisonment of the Grenada 17. We challenge them to use their journalistic training, instead, to counter the malignant and untruthful narrative that was perpetrated about these political prisoners, and the whole process of reform in Grenada, by the government of the USA.

Extract of 10 points quoted from affidavit presented by Ramsey Clark, former Attorney General of the USA, concerning the role of the US government in the trial of imprisoned leaders of the former New Jewel Movement of Grenada.

The affidavit had 23 numbered points. It was sworn to and signed by Ramsey Clark on 21 October 1997. It was filed in a Federal Court in Michigan, USA, and formed part of the evidence leading to the court’s order to release secret United States government documents on the case of the Grenada 17. [From ‘Affidavit of Ramsey Clark’, on website of Dr Rich Gibson: htttps://richgibson.com/RamseyClark.htm]

“6. When the United States invaded Grenada, it claimed as one of its justifications the assassination of Maurice Bishop and the murder of a number of persons who were present with him. It accused Bernard and Phyllis Coard, Hudson Austin, and the 14 other surviving leaders of the New Jewel Movement of perpetrating this act.

Senator identifies finance as major shortcoming for sectors he represents