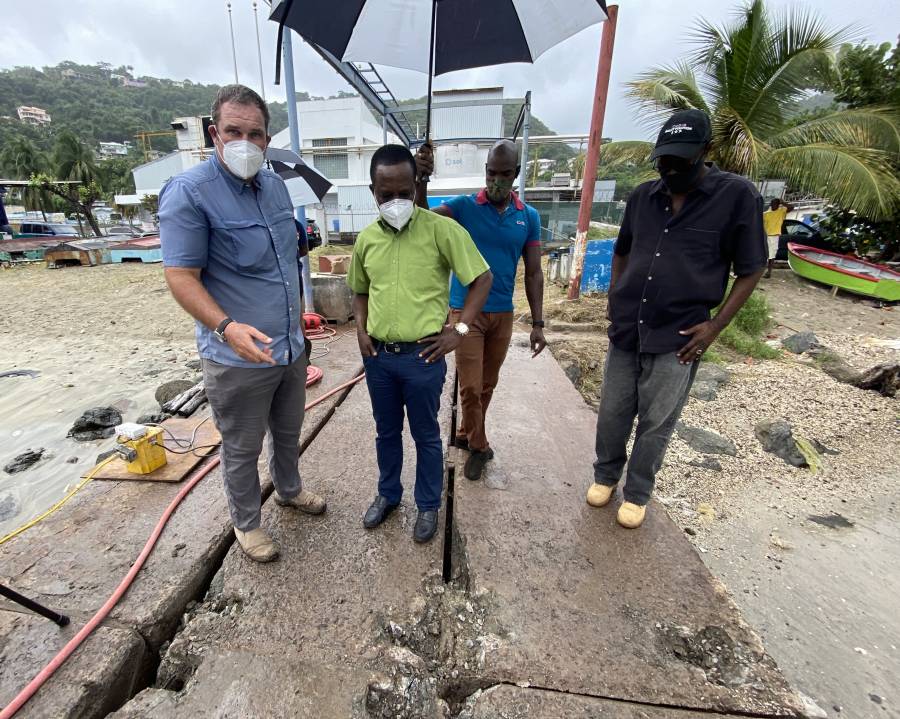 This story was posted 2 years ago
in Agriculture/Fisheries, PRESS RELEASE
3 min. read

The Government of Grenada has joined hands with Spice Isle Fish House Limited and the Southern Fishermen Association Inc to bring much needed repairs to the Grand Mal jetty.

The project entails the replacement of damaged concrete slabs on the jetty which create a potential hazard for the safe landing of fish. Over the weekend, phase one of the project was completed, with 12 of the damaged slabs being replaced. Another 40 slabs will be custom-built and replaced in the coming months.

Prime Minister, Dr the Right Honourable Keith Mitchell, who is also the parliamentary representative for the area, visited the project site on Saturday. He was accompanied by General Manager of Spice Isle Fish House, James Ince and Charles Radix, a member of the board of the Southern Fishermen Association.

Dr Mitchell said, “I am happy to see the work being done on this jetty because there have been complaints about its conditions for some time now. What is notable about this and which is also the model we would like to see happening more in the country, is the cooperation between the private sector and Government.”

The project is jointly funded by the Government which is contributing $200,000 and the Southern Fishermen Association and Spice Isle Fish House which are collectively investing $100,000.

The Prime Minister said Government was considering financing the project in totality but when Ince came forward with the proposal to invest a sizeable sum, the initiative was welcomed.

Dr Mitchell said, “Mr Ince recognises that as an investor in the area, the livelihood of the people is also very important. I therefore went to Cabinet seeking support for the project and it was agreed that Government would contribute to ensuring the project’s completion. This is the type of partnership that will help to further advance the country’s development.”

Both Ince and Radix commended Dr Mitchell and the Grenada Government for agreeing to jointly execute the long-awaited project. They also gave assurances that their respective organisations are committed to ongoing engagement that will promote and advance the fisheries sector in Grenada.

The Prime Minister also affirmed Government’s commitment to restructuring the fishing sector, including making changes in the administration and leadership, and possibly in some cases, bringing in new people with fresh ideas to help the fishermen. He said, “The fisheries sector is an important sector for the country because of the amount of people who rely on it for their livelihood. It is therefore in Government’s interest to do what it can to maximise the potential of the sector.”

Dr Mitchell also acknowledged that some associations are plagued by problems and it is Government’s intention to do whatever it can to bring harmony and a spirit of cooperation to the associations for the benefit of the entire sector and the country as a whole.

The Minister of Fisheries will host a series of meetings with the various associations to examine their structure and operation and explore ways to improve operational efficiency and effectiveness.