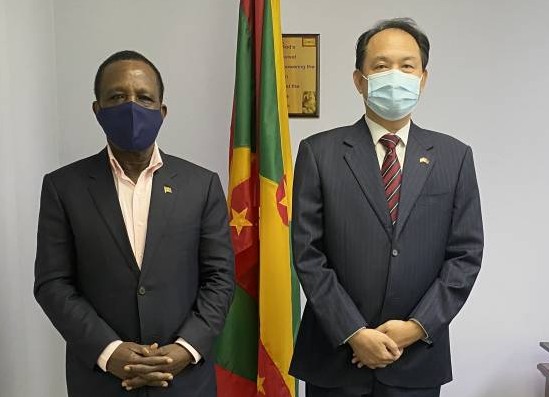 Greeting the ambassador in his office, Dr Mitchell said, “I value the opportunity to express appreciation on behalf of the Government and people of Grenada for your years of service, representing the People’s Republic of China in our country. We appreciate the efforts you have made to further strengthen the relationship between China and Grenada.”

Dr Mitchell referred to the re-establishment of diplomatic relations with China in 2005 as one of the hallmarks of his time as Prime Minister. He also expressed a desire to see that relationship continue to grow.

The Prime Minister assured the Government of the People’s Republic of China, through its ambassador, that Grenada will continue to support China in the international arena, particularly at the United Nations.

Ambassador Zhao said he was happy to play a role in advancing Grenada-China cooperation, and he expressed confidence that his successor will continue to build on that relationship.

He said he is particularly grateful to have been able to bring the low-income housing projects to fruition under his watch.

One of the Chinese Ambassador’s last official duties was the completion ceremony for the Low-Income Housing Project in The Villa, St Patrick.

He assured the Prime Minister that China maintains its support for Grenada and other developing countries to help them advance their economic and social progress.

Since re-establishing diplomatic relations 15 years ago, Grenada has benefitted from a significant amount of grant aid from the People’s Republic of China.

NOW Grenada is not responsible for the opinions, statements or media content presented by contributors. In case of abuse, click here to report.
Tags: gispeople’s republic of chinazhao yongchen
Next Post