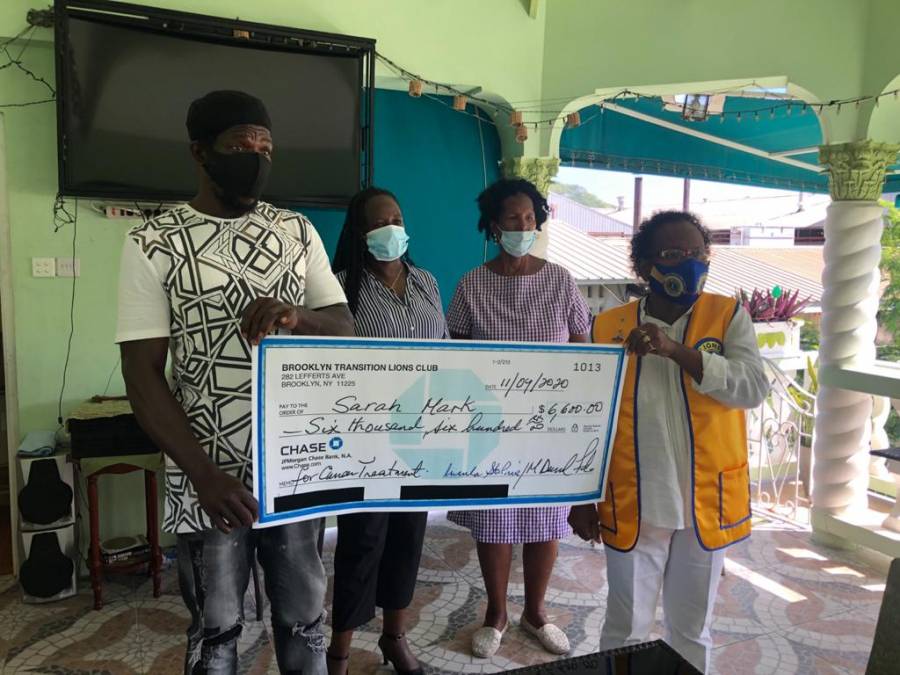 This story was posted 2 years ago
in Health, Youth
3 min. read

Through a special fundraising initiative involving Brooklyn Transition Lions Club, the family members of a 9-year-old girl who is suffering from leukaemia were provided with more than EC$17,000 to defray the cost of her cancer treatment in Barbados.

Sarah Mark from Mt Craven, St Patrick, was an active child until the last quarter of 2020 when she complained about feeling unwell and was unable to defecate. She was first seen by the district medical officer who immediately sent her to the General Hospital for various blood tests. There, her family was informed about her health status.

“They told us she had more white than red blood cells,” said her father, Edward Frame. “And from that moment it’s just hospital visits, things just got worse with her.” He was extremely thankful for the assistance from the Club whose representative in Grenada is Carnice Modeste – a retired Grenadian nurse who spent most of 2020 in Grenada. She is very active in social advocate initiatives for children and is one of the main persons behind the Cuthbert Peters Memorial Scholarship Fund.

Modeste said that she became involved because her Club in Brooklyn observed September 2020 as Childhood Cancer Awareness Month. “Though I was in Grenada since March of 2020, I was charged with the task of identifying a child with cancer in Grenada. After making many inquiries, I was referred to the paediatric department of the General Hospital. I was then led to the direction of a child in need of financial support,” she said.

“I then informed my Club in New York who immediately decided to take on the challenge to raise the funds needed to assist with the exorbitant expenses for her treatment in Barbados. Now, through the efforts of some Grenadian organisations based in New York, including the Grenada, Carriacou and Petite Martinique Nurses Association, the Mac Donald College Alumni Association and some individuals in the diaspora, we were able to raise more than US$6,600,” she said.

Following Mark’s diagnosis, health officials made the necessary contacts for her to receive the treatment in Trinidad, Cuba or Barbados but because the Trinidad and Cuba airports are closed due to Covid-19, she was accepted in Barbados.

She travelled to Barbados with her aunt Andorra Mark in mid-October and received 2 months of chemotherapy treatment. She returned in December 2020 and is scheduled to receive continued treatment at the General Hospital.

“The money presented to the family is to help defray some of the cost,” said Modeste. The total cost is approximately EC$70,000.

Mark who has 2 other siblings, was unable to attend the ceremonial handing over of the cheque because when the event occurred on Monday, 11 January 2021 she had been warded at the General Hospital with a high fever.

The family is in continuous need of financial assistance.