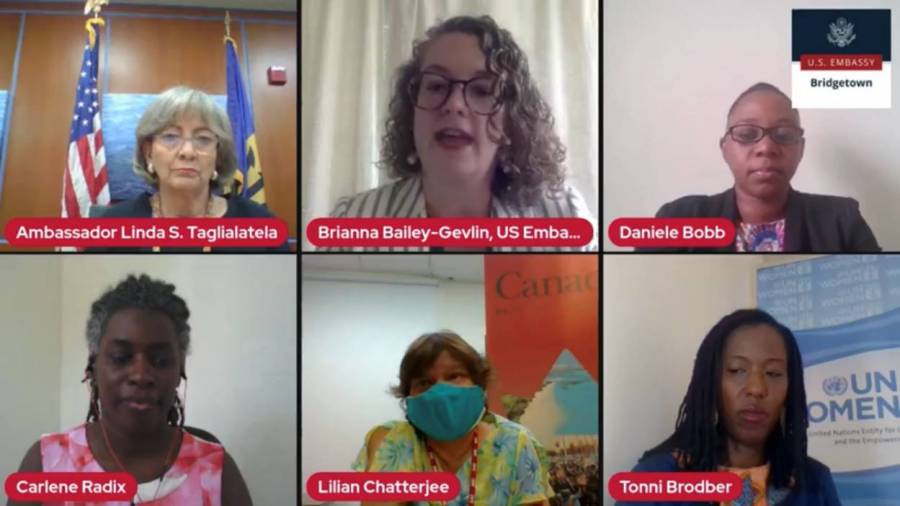 This story was posted 1 year ago
in Business, PRESS RELEASE, Technology
2 min. read

On 30 March, the Embassy of the United States and the High Commission of Canada jointly hosted a virtual dialogue on the “Gender Economic Disparity in the Eastern Caribbean.”

The event, streamed on Facebook Live, featured a moderated discussion on the ways in which the private and public sectors can incorporate more gender-inclusive policies as the region builds back from Covid-19. The panel discussion featured leading regional gender experts from UN Women, the Institute of Gender and Development Studies – Nita Barrow Unit at the University of the West Indies (UWI) Cave Hill Campus, and the Organisation of Eastern Caribbean States (OECS).

US Ambassador Linda S Taglialatela opened the Tuesday morning event, which underscored the US and Canada’s shared commitment to advancing gender equality in the Eastern Caribbean. In her remarks, Ambassador Taglialatela remarked, “where there is inequality, there is great opportunity. As we rebuild our economies, we can better invest in women; we can strengthen programs that promote women’s economic independence.” The panellists, including Tonni Brodber (Multi-Country Office Representative, UN Women), Dr Daniele Bobb (Lecturer, UWI Cave Hill Campus), and Dr Carlene Radix (Head of Human and Social Division, OECS), addressed the existing inequalities in the labour market, the impact of Covid-19, and the path forward to create more gender-inclusive economies.

Following a lively Q&A session, Canadian High Commissioner-Designate, HE Lilian Chatterjee stressed that in spite of the challenges posed by Covid-19, stakeholders have a unique opportunity to chart a more inclusive path forward for all members of society. High Commissioner Chatterjee further commented, “advancing gender equality and the empowerment of women and girls is a top priority for Canada, and at the heart of our government’s Feminist Foreign Policy. It is through continuous dialogue and direct engagement with partners that we can achieve a more gender-inclusive society.”

The event concluded the US Embassy’s month-long campaign in honour of Women’s History Month, which the United States observes annually each March. As likeminded allies and regional partners, Canada and the United States share a commitment to gender equality domestically and internationally. The Canadian High Commission and the US Embassy last partnered on an initiative focused on the empowerment of women and girls in March 2017, hosting a networking lunch for Canada’s High Commissioners for the Day with female Barbadian leaders at the residence of the US Deputy Chief of Mission.

NOW Grenada is not responsible for the opinions, statements or media content presented by contributors. In case of abuse, click here to report.
Tags: carlene radixcoronaviruscovid-19daniele bobblinda taglialatelanita barrowtonni brodberus embassy
Next Post

COP not aware of any pending amendment to nightly curfew