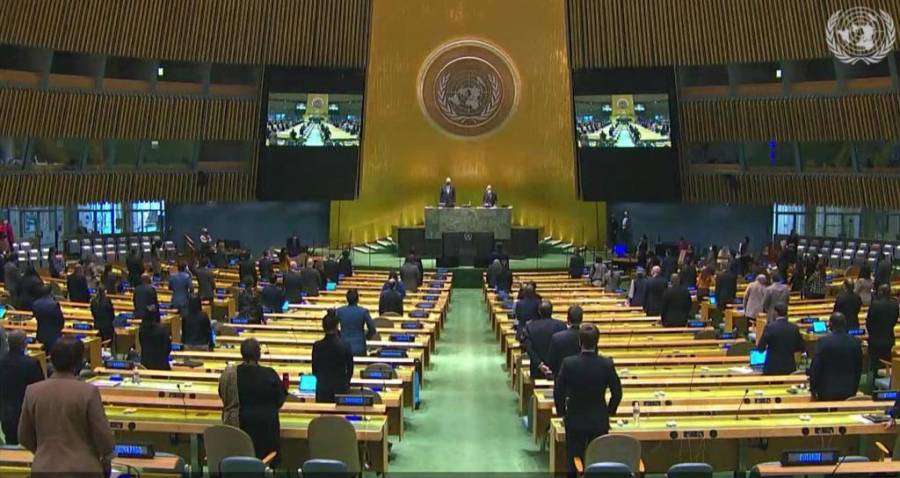 This story was posted 8 months ago
in Politics, PRESS RELEASE
3 min. read

On 25 March 2021, history was made for the Caribbean Community (Caricom) and the African Group with the debut of the first joint statement of the 2 regions (68 member states, over one-third of the United Nations’ 193 members), under the umbrella of the new geopolitical grouping, known as AfCAR (Africa Group-Caricom), an initiative whose founding was co-led by the Ambassadors and Permanent Representatives of Grenada and Botswana, HE Keisha A McGuire and HE Collen Vixen Kelapile.

Caricom and African Ambassadors, together with the United Nations Secretary-General, the President of the UN General Assembly and wider membership, converged at the United Nations General Assembly Hall to commemorate the International Day of Remembrance of the Victims of Slavery and the Transatlantic Slave Trade, held under the theme, “Ending Slavery’s Legacy of Racism: A Global Imperative for Justice.”

The AfCAR statement was delivered on behalf of the 68-member grouping by Her Excellency Ambassador Carolyn Birkett Ambassador and Permanent Representative of Guyana to the United Nations, who noted in her address that, “the horror of slavery separated 12 million Africans from the motherland and created a diaspora in the Caribbean. Separated from our families, now we are standing here reunited with one voice. Given this historic reality and linkage, it is indeed fitting that AfCAR’s first statement within the United Nations should come as we commemorate the International Day of Remembrance of the Victims of Slavery and the Transatlantic Slave Trade.”

AfCAR also expressed that the 2020 events sparked by the death of George Floyd in the United States and the emergence of the Black Lives Matter movement brought into sharp focus the need to pay more attention to addressing the legacy of slavery and the transatlantic slave trade. The Group further highlighted that the legacy of slavery is seen today in entrenched and systemic racism, noting that the Covid-19 pandemic revealed deep disparities in the care and outcomes for persons of African descent and other minorities impacted by the coronavirus.

With the outcry of Black Lives Matter heard around the world, and in what could only be described as a most poignant moment of the Commemoration, the General Assembly, including the President of the General Assembly Volkan Bozkir, and the Secretary-General of the United Nations António Guterres, stood in solidarity with ending racism.

The 68 members of AfCAR also highlighted the issue of reparations, which is “pivotal to restorative justice and to creating opportunity and equity for those whose limbs and lives were used without mercy or remuneration to build societies and strong economies.” The Group further underscored the role that the multilateral system could play to ensure that the stain of slavery is finally lifted from the lives of people of African descent.

Now that AfCAR has made its debut within the United Nations, the group is expected to enhance and deepen its cooperation and be more active on issues of common interest on the international stage.

In February 2020, upon the initiative of the Ambassadors and Permanent Representatives of Grenada and Botswana, HE Keisha A McGuire and HE Collen Vixen Kelapile, the Ambassadors and Permanent Representatives of the African Group and Caricom Caucus at the United Nations in New York formally agreed to establish the African Group-Caricom (AfCAR) Collaboration Initiative. In addition, the regional steering committees for the initiative comprise of, from the African Group, the ambassadors of Algeria, Botswana (co-Chair), Cameroon, Eritrea, Kenya, Morocco, Rwanda and Sierra Leone, and from the Caricom Caucus, the ambassadors of Antigua and Barbuda, Barbados, Grenada (co-Chair), Suriname and Trinidad and Tobago.

The purpose of AfCAR is broadly anchored on reinforcing the historical bonds between African and Caricom states, based on common aspirations and the 3 principles of solidarity, partnership and multilateralism for the common benefit of the 2 regions.

In particular, AfCAR seeks to ensure a structured and coordinated approach and cooperation on issues of common interest on the agenda of the United Nations at Headquarters in New York and thus facilitate the desire of African and Caricom Heads of State and Government and the aspirations of the peoples of the two interconnected regions.