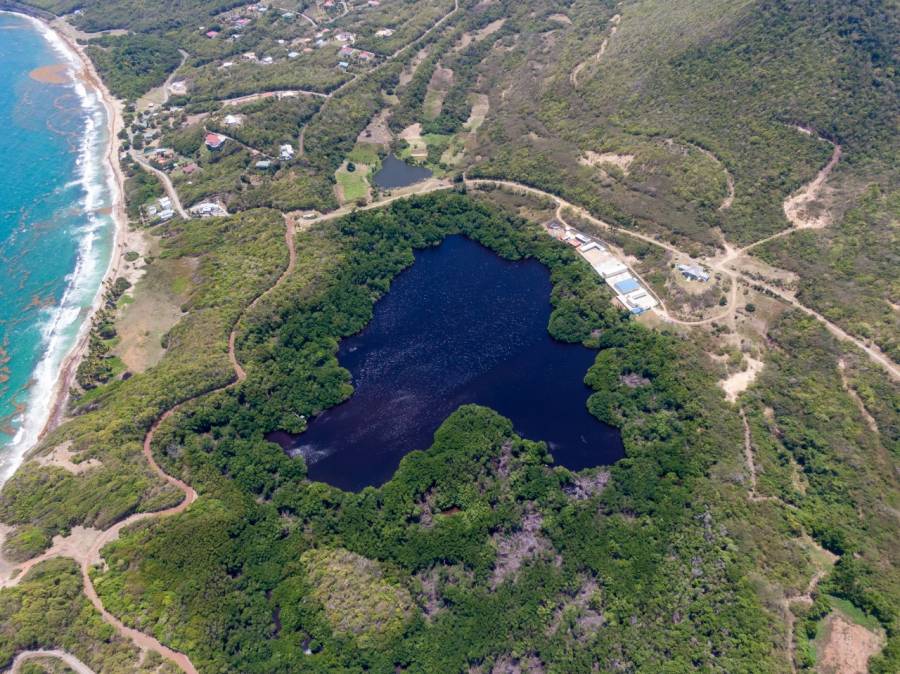 According to 2005 statistics from the Food and Agriculture Organisation (FAO) of the United Nations, it is estimated that Grenada’s 295 hectares of mangroves have experienced a 27.1% reduction. However, in recent times hotel development projects particularly in densely populated mangrove areas such as La Sagesse and Mt Hartman has further reduced the island’s already fragile mangrove population, with local experts estimating a loss of 20 additional acres of mangroves between 2008 and 2021.

This alarming rate of deforestation can potentially have a devastating effect on the local fishing industry which in 2019 contributed 1.59% to the country’s GDP. “Since most of the mangrove on the island are fringing and provide a habitat for juvenile fish, including commercially important species, this can have devastating long-term effect on species diversity and cause long term collapse of a vital fishing industry,” said Nigel Gibbs, Marine Biology student at St George’s University (SGU).

Gibbs was a lead researcher on a Mangroves Fish Assemblages survey that sought to identify the potential problems that can result from anthropogenic pressures placed on mangrove systems. The research which took a year to complete was conducted in collaboration with GAEA Conservation Network. “Loss or destruction to the habitat will remove a critical link in the recruitment and connectivity to adjacent habitats such as seagrass and coral reefs. Further analysis has to be made a priority to increase the baseline data already collected from this research. To guide management practices, like the development of MPAs for conservation. Limited coastal development and education on the importance of this ecosystem,” Gibbs explained.

As part of his research, Gibbs also assessed the abundance, biomass and marine diversity at Mt Hartman and Westerhall Bay taking into account the difference in anthropogenic activities that may adversely impact these ecosystems. Based on his findings there was a significant difference in species (richness) at the Mt Hartman site but no significant difference in species composition. These findings suggest that Mt Hartman would have accounted for a greater number of individual species while the composition was almost the same. He said this finding is significant since it was hypothesised that Westerhall would have a higher richness based on the lower levels of anthropogenic activities in the area when compared to Mt Hartman.

“With development taking place at a significantly higher rate at the Mt Hartman site. There is cause for concern. Habitat loss could result in a decline in species and the recruitment service that the ecosystem. Continuous development without careful planning may induce a trophic cascade and one species may be lost causing a domino effect in that e ecosystem,” Gibbs said. “Based on these findings, careful planning is needed to guide development. Management efforts like EIAs and land use policies must be developed to mitigate against habitat destruction. Existing ecosystem protection acts/laws must be strictly adhered to, improved and enforced.”

President of GAEA Conservation Network and Fisheries and Marine Biologist Danielle Ince said these findings must be taken seriously since 40-50% of the top 10 species landed in Grenada were recorded during the surveys, suggesting that they are dependent upon mangroves to spawn.

“In a similar study conducted on mangroves in the Gulf of California, they reported a direct relationship between mangrove size and fish landings. That is, as the size of mangroves increased, so too did commercial fish landings. When this is compared to the relatively small size of our existing mangrove ecosystems, their health and productivity become essential for the future of our nearshore fisheries. With the continued loss of our mangroves, we would expect a decline in the quantity of fish that coastal fishers can harvest. This may have a ripple effect on coastal communities as fisherfolk are the bedrock of many communities and many Grenadians consume fish as a major source of protein. So, by preserving and restoring mangroves, we are also safeguarding our food security and an important livelihood,” Ince said.

The benefits of coastal vegetation such as mangroves to the ecosystems are insurmountable and include preventing coastal erosion from storm surges, filtering water, and providing nursery habitat for many fish species. While landings in Grenada are dominated by pelagic fish species (80%), followed by reef fish (18%), the livelihood of many of our fishers depends heavily upon inshore pelagic and reef fish species including the Mangrove snapper (Lutjanus griseus), Schoolmaster snapper (Lutjanus apodus), Yellowtail snapper (Ocyurus chrysurus), Barracuda (Sphyraena barracuda) and Parrotfish (Sparisona aurofrenatum), which is considered keystone species due to the important role it plays in protecting coral reefs.

Data on the landing of inshore pelagic and reef fish species are not available since many of these catches are not landed at the primary sites according to a 2019 World bank report entitled COAST Insurance: An Assessment of Grenada’s Fisheries Sector. GAEA Conservation Network is therefore calling for serious attention to be paid to the conservation and restoration of Grenada’s mangroves to preserve the livelihood of the many fishers who are dependent on the industry.