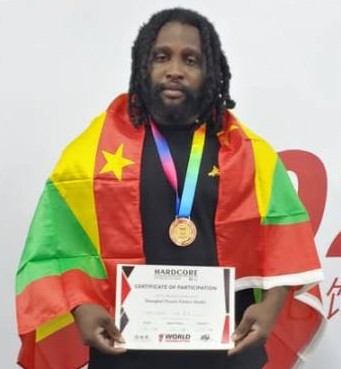 This story was posted 1 year ago
in Sports
3 min. read

Residing in Wuhan China last year, in the epicentre of the coronavirus outbreak, Alexander has emerged stronger than ever. Achieving moderate success in the Strongman category, he proved that he can compete in a new sporting discipline and dominate, winning a gold medal at the World Powerlifting Competition in Shanghai on 22 May 2021.

“Since I started lifting, I knew that I found my sport (strongman) but for the past 2 years I have been living in China and powerlifting is the sport that is featured here. I decided to switch up my training and give it a go. It seemed a bit easier at first but over time the heavy-lift just gets to you physically. Nevertheless, I set a goal to at least win one major title in a field that is new to me (and that I did),” he said.

Alexander who is on the verge of completing his master’s law degree at the Wuhan University of Technology (WHUT) recounts the tolls of life under quarantine in Wuhan, and not being able to train which is a requirement to maintain fitness. “I don’t know where to start to tell you the challenges that myself and other Grenadian students faced out here during Covid-19. As one of the students who were in the epicentre of the pandemic here in Wuhan, I can say, in the initial stages were one of the scariest times of my life. The thought of dying without getting to see everyone I love flooded my mind daily.”

He recounted his experience of self-isolation and the mental focus needed to cope. “Then comes the total lockdown, no training, and total self-isolation. I was forced to harness the mental strength I thought I never had, and find a coping mechanism to survive that phase. All in all, I learned how mentally strong I am. I learned to adjust to being an online learner, and most importantly, I found inspiration to write a book that I planned to write during my studies,” he said.

Despite the ordeal, Alexander has set his eyes on achieving new heights of strength by stepping out of his comfort zone and venturing into powerlifting, a prominent sport featured in China. During the World Powerlifting Competition in Shanghai, Alexander competed in powerlifting categories comprised of Squat 265 kg, Bench Press 150 kg, and Deadlift 275 kg. He logged a total of 690 kg in the 3 events combined.

Although Powerlifting and Strongman are within the same category of strength sports and share some similarities, there are several distinct differences that separate the 2 sports. For instance, powerlifting is primarily focused on 3 specific exercises to help athletes max out on their weightlifting capabilities. However, the Strongman competitions are more diverse in their training style and require that athletes lift and pull real-world objects like Atlas stones, tractor tyres, and even trucks.

Alexander has set his eyes on another World Powerlifting competition in Wuxi on Saturday, 29 May 2021. He stated that his ultimate goal is to have at least one major title in at least 3 of the 5 types of strength sports. The 34-year-old has been competing in this sport since 2013 and has participated in over 20 Strongman competitions in his sporting career with powerlifting added to his record. He is expected to complete his law degree in June 2022.

NOW Grenada is not responsible for the opinions, statements or media content presented by contributors. In case of abuse, click here to report.
Tags: marcus alexanderpowerliftingshanghaiwuhan university of technology
Next Post

Grenada to share thousands of unused vaccines with regional countries