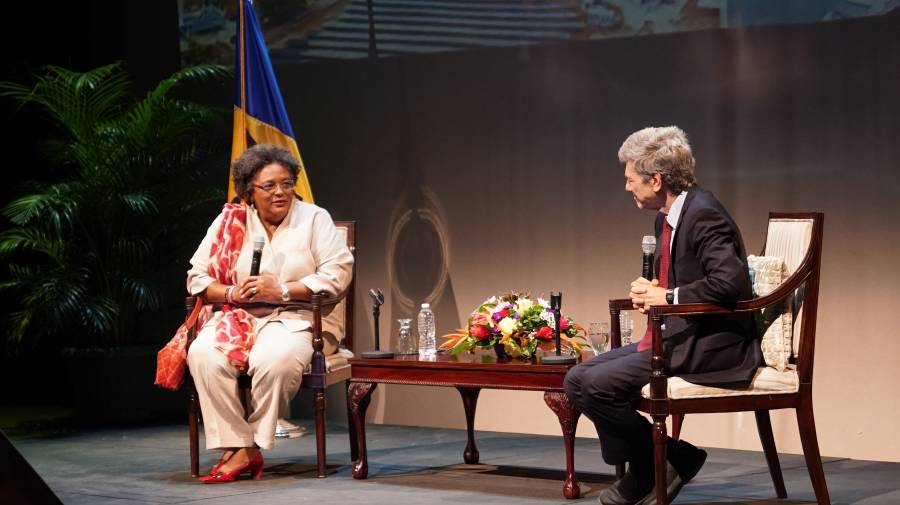 This story was posted 12 months ago
in Business, Politics, PRESS RELEASE
3 min. read

The Honourable Mia Amor Mottley Prime Minister of Barbados has called for a debt repayment system for Caribbean countries similar to what was granted to Britain after World War II that allowed that country to have the fiscal space to return to a path of development.

She was speaking during a UWI Vice-Chancellor’s Forum at the Distinguished Arthur Lewis Event last Monday, 21 June at The UWI Cave Hill Campus which also featured Professor Jeffrey Sachs, Director of the Center for Sustainable Development at Columbia University.

Lamenting the absence of such provisions in the international financial system, Prime Minister Mottley pointed out that middle-income countries have been set back at least a decade because of the Covid-19 pandemic. Speaking on the topic ‘A Conversation on Sustainable Island Futures’, she pointed out disparities in the global financial system that provided developed countries with significant leeway to access financing at minimal repayment terms compared to that of developing countries, and to make financial decisions that have a global impact without any consultation.

Prime Minister Mottley also pointed to training and education as 2 critical factors that will spur Barbados’ development in the coming years, and noted that The University of the West Indies has a critical role to play. She said however, the challenges of delivering education reform and other social services have been further compounded by the threats posed by climate change, coupled with the global pandemic.

Professor Sachs, who was advisor to former President of Russia, Boris Yeltsin said countries around the world need to work together, rather than practice divisive, winner-takes-all politics, which he described as dangerous. “The discussions that we’re having these days in the world are really consequential, I think they’re the most consequential discussions that the world would have had since the end of World War II because the end of World War II of course, required fundamental reorientation. One of the best things that happened then was the formation of the UN…We’re probably at a similar point in history with a number of tectonic plates moving in the world, things are shifting so dramatically that unless we are able to take a cooperative perspective on them, we will lose not only a historic opportunity, but tremendously endanger ourselves and the world.”

Professor Sir Hilary Beckles Vice-Chancellor of The University of the West Indies noted the historic significance of the Mottley-Sachs conversation. “It’s the most important conversation facing all of us in the world today. How do we look at these post-colonial states in a globalised economy that insists upon a certain control over the world’s resources? How do all of these people who are demanding their fair share and dignity in this world proceed? What’s the most effective path? What’s the nature of resistance and partnership? How do we combine seemingly contradictory forces to achieve collaboration and justice?” Vice-Chancellor Beckles asked.

Governor-General Dame Sandra Mason also attended the forum, which was held at the Errol Barrow Centre for Creative Imagination.

NOW Grenada is not responsible for the opinions, statements or media content presented by contributors. In case of abuse, click here to report.
Tags: center for sustainable developmentcolumbia universitydebtdevelopmenthilary becklesjeffrey sachsmia mottleyrepaymentthe university of the west indiesuwi
Next Post