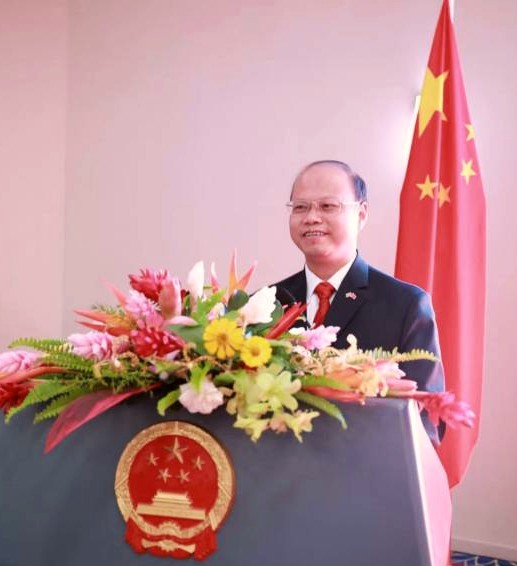 This story was posted 11 months ago
in Politics, PRESS RELEASE
7 min. read

On 24 June 2021, a reception was held in Radisson Resort by the Chinese Embassy in Grenada to celebrate the 100th anniversary of the founding of the Communist Party of China (CPC).

The reception was honoured by the presence of Dr the Right Hon. Keith Mitchell, Political Leader of the New National Party (NNP) and Prime Minister of Grenada; Hon. Gregory Bowen Deputy Political Leader of the NNP and Minister for Finance; Ministers and Members of Parliament, President of the Senate and Speaker of the House of Representatives, as well as senior officials from NNP and the National Democratic Congress (NDC).

In his speech, HE Wei Hongtian Chinese Ambassador to Grenada hailed the achievements China has made under the leadership of the CPC over the past 100 years, introduced the CPC’s people-centred philosophy and reaffirmed the CPC’s commitment to the cause of world progress. Ambassador Wei expressed his confidence in a brighter future for China-Grenada relationship as the CPC and Grenadian political parties step up their cooperation and exchanges, and pledged to further strengthen the friendship between the 2 peoples.

In his remarks, Hon. Boatswain Chairman of NNP applauded the CPC for the magnificent changes it has brought to China over the past century. He underlined the importance of “striving for the wellbeing of the people, rejuvenation of the nation and common good of the world” as the original mission of CPC, and praised the CPC for its contributions to improving the lives of the Chinese people as well as to the betterment of humanity. Hon. Boatswain also thanked China for its support to Grenada over the past 16 years in areas such as education, agriculture, housing, health, sports, etc, and pledged that the NNP and Grenada will adhere to its commitment to One-China Policy and further strengthen the relations between the two parties and two countries.

Adrian Thomas Acting Political Leader of NDC also congratulated the CPC on its centenary and cheered the accomplishments it has made in political, economic and scientific areas as well as the arduous poverty-alleviation cause. He expressed confidence in strengthening cooperation and exchanges between the two parties.

It gives me great honour to warmly welcome all of you to this reception in celebrating the 100th anniversary of the founding of the Communist Party of China! As the General Secretary of the CPC and the President of China, Mr Xi Jinping said, “the leadership of the CPC is the defining feature of socialism with Chinese characteristics. Without the CPC, there would not be the People’s Republic of China, nor would there be China’s prosperity.” Now, I would like to take this opportunity to share some points with our Grenadian friends on the CPC’s glorious history of 100 years.

At the time when the CPC was founded on 1 July 1921, China was faced with foreign bullying and even invasion. The whole nation suffered from a destitution both physical and spiritual. The CPC’s fundamental missions were to seek wellbeing for the people and realise the great rejuvenation of the Chinese nation. After 28 years of hard struggle and sacrifice in expelling imperialists, colonisers, and feudalists, the People’s Republic of China was founded on 1 Oct 1949, which helped the Chinese people regain confidence and dignity. The CPC united the Chinese people, achieved national independence and paved the way for even greater success.

CPC keeps practicing its founding principles — to serve the people wholeheartedly and to practice the philosophy of people-centered development. When the People’s Republic of China was founded 72 years ago, China was impoverished, its share of world GDP was less than 5%, its per capita GDP was merely US$36. Under the strong leadership of the CPC, and with solidarity and hard work of all Chinese people, China has become the second largest economy, the largest volume of trade of goods, the largest amount of industrial production and the largest foreign reserves in the world. In particular, China’s yearly GDP growth recorded 9.5% on average for the past 42 years, and more than 700 million people were lifted out of abject poverty since China implemented the opening-up and reform policy in late 1978. China has created the “two miracles” which are rapid economic development and long-term social stability. Though still facing many challenges due to Covid-19, China’s economy has shown strong resilience and it is expected to increase by 8.5% this year.

Today, China occupies 17% of the world GDP, its per capita GDP is about US$10,500 and 1.4435 billion Chinese people enjoy a very happy and harmonious life. And the CPC is leading the people towards the Chinese Dream of national rejuvenation and the second centenary goal — to build China into a great modern socialist country that is prosperous, strong, democratic, culturally advanced, harmonious, and beautiful by the centenary of the People’s Republic of China.

For a hundred years, the CPC has always put people first, applying the principle of universality of human rights in the context of the national conditions. It regards the rights to subsistence and development as the primary and basic human rights, and believes that living a life of contentment is the ultimate human right. The CPC promotes the well-rounded development of the individual, and strives to give every person a stronger sense of gain, happiness and security. China has been an active participant in matters of international human rights, providing a Chinese contribution to global human rights governance and progress, and working with other countries for common development and a better future.

100 years ago, the CPC had only 58 members, now the number is more than 91million. As a party being in power for 72 years, CPC has always been an adaptive political party that keeps pace with the times. It earns from advanced experience with an open mind, dares to face problems and revolutionise itself. At the same time, CPC emphasises self-innovation, reflection and reform, continues to strengthen supervision by the rule of law, persists in the fight against corruption, makes the party more united and stronger ideologically, politically and organisationally.

Decades ago, the founding of PRC inspired and encouraged the national liberation movement worldwide, which initiated a wave of independence from colonialism. The CPC is devoted not only to serving the wellbeing of the Chinese people but also to striving for human progress. China is firmly committed to be a builder of world peace, a contributor to global development, and a defender of international order. Ideas such as building a new type of international relations featuring win-win cooperation, implementing Belt and Road Initiative, and fostering a community with a shared future for mankind, proposed by General Secretary Xi Jinping, contribute Chinese wisdom, solutions and strength to establishing a new and fair global governance system. As the world’s largest party, the CPC has established relationship with more than 600 political parties in over 160 countries and engaged in experience-exchange with them in governing party and nation affairs, but it never seeks to impose its values on the others. We hope that the achievements of the CPC and China could bring confidence to other parties and nations who wish to explore a path for development that best fits its own conditions.

In keeping with the 4 principles of “independence, equality, mutual respect and non-interference in internal affairs” on party-to-party relations, the CPC has established constructive and comprehensive relationship with major Grenadian political parties, the NNP and the NDC, which in turn boost China-Grenada relations.

Both the Grenadian government and major political parties in Grenada uphold the One-China Policy which china highly appreciates. Over the past 16 years since the resumption of diplomatic ties, the 2 countries have lent firm mutual support to issues concerning each other’s core interests, laying a solid foundation for the sustainable and stable development of bilateral relations. In the international arena, every time China speaks for the interest of developing countries, upholds international justice and opposes interference into other’s internal affairs, we have Grenada at our back and to that we are grateful.

A friend in need is a friend indeed. The cooperation between China and Grenada in areas such as infrastructure, housing, agriculture, education, health, human resources training has yielded tangible results. China and Grenada have stood together to confront the challenges since the beginning of Covid-19. China will continue to advance global cooperation on epidemic response, strengthen joint prevention and control, and provide assistance and help to countries in need, Grenada included.

The CPC upholds the values of peace, development, equity, justice, democracy and freedom. The CPC has established good relationship and kept contacts and exchanges with NNP and NDC, and CPC is ready to further share experience with you all and learn from each other. I also wish to take this opportunity to thank NNP and NDC for the congratulatory letters you have sent to the CPC on its centenary.

The accomplishments that the CPC has achieved will serve as a motivation that galvanise us into a new struggle for an even better future. By reaffirming its founding principles, the CPC projects its determination in delivering its promise to the Chinese people and the common good of the world. The CPC will stay committed to the path of peaceful development. And we will work with all countries to build an open, inclusive, clean and beautiful world that enjoys lasting peace, universal security and common prosperity. The CPC is willing to join hands with Grenadian major parties to level up our cooperative relationship, deepen the people’s mutual understanding and friendship, and strive for the benefits of the 2 nations and 2 peoples.

In conclusion, I would like to express my sincere gratitude to you all for the support and help that you extended to me since I took my post as Ambassador of the People’s Republic of China to Grenada late last December. And I look forward to working more closely with you all for the further enhancement of friendly relations and cooperation between our two countries.

NOW Grenada is not responsible for the opinions, statements or media content presented by contributors. In case of abuse, click here to report.
Tags: adrian thomaschinese embassycommunist party of chinagregory bowenkeith mitchellwei hongtian
Next Post