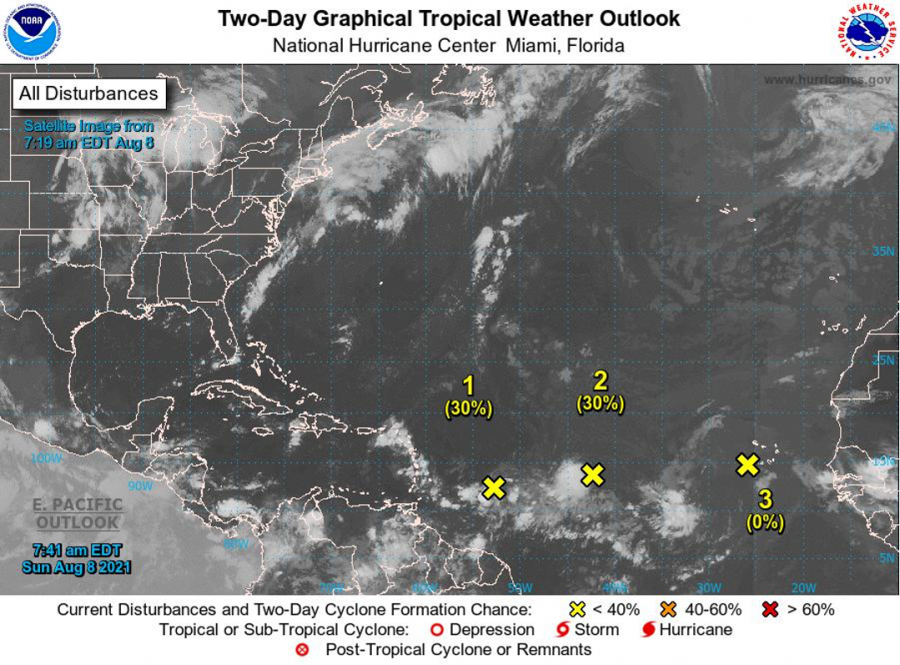 Tropical Wave: The axis of a tropical wave is near 65° W, moving westward 10 to 15 knots. Despite the axis of the wave being the west of Grenada, a band of trailing moisture is now sweeping across the Lesser Antilles. Radar imagery is depicting showers of varying intensity moving across the islands. Given the northwest to southeast orientation of the moisture, model guidance is indicating that the potential for significant showers activity over Grenada will be greatest from about midday. Hence, the forecast is partly cloudy to cloudy with light to moderate showers and a medium chance of thunder by afternoon.

Low Pressure 1: An area of low pressure is producing disorganized showers and thunderstorms over the tropical Atlantic several hundred miles east of the Windward Islands. Environmental conditions are expected to be favorable to support some gradual development, and this system could become a tropical depression while it moves west-northwestward at 10 to 15 mph. The disturbance is forecast to cross the Lesser Antilles near the northern Windward Islands or Leeward Islands. Nevertheless, Grenada can experience showery activity on Tuesday as moisture associated with the area of low-pressure moves overhead. This system has a low chance, 30%, of becoming a tropical cyclone within the next 48 hours.

Low Pressure 2: Showers and thunderstorms associated with an area of low pressure located over the tropical Atlantic about midway between the Cabo Verde Islands and the Lesser Antilles have become more concentrated since yesterday. Environmental conditions are expected to become a little more favorable for gradual development, and this system could become a tropical depression within the next few days. The system is forecast to move slowly toward the west-southwest or west during the next couple of days, and then move a little faster toward the west by mid-week. This system has a low chance, 30%, of becoming a tropical cyclone within the next 48 hours.

Low Pressure 3: Showers and thunderstorms associated with a broad area of low pressure located about a hundred miles west of the southwesternmost Cabo Verde Islands have diminished since yesterday. Strong upper-level winds and cooler waters are expected to prevent the development of this system while it moves toward the west or west-northwest. This system has a low chance, near 0%, of becoming a tropical cyclone within the next 48 hours.

The Meteorological Service will continue to monitor these systems.

The next update will be issued at 2:00 pm