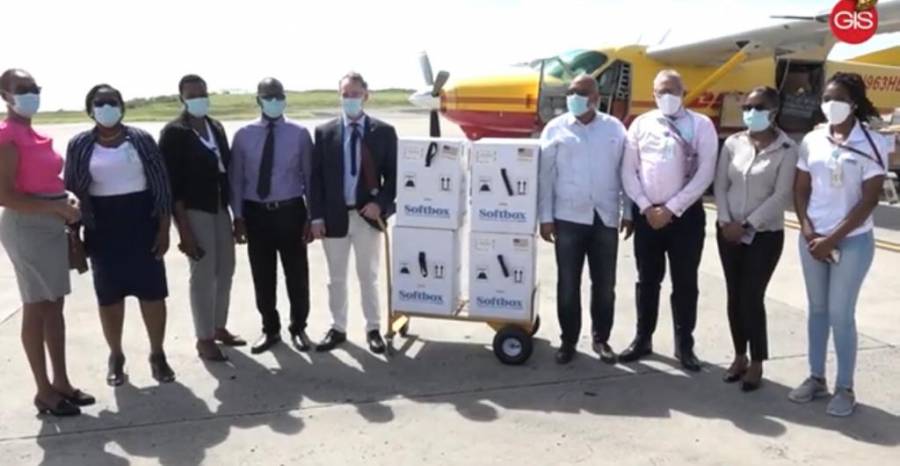 This story was posted 9 months ago
in Health
2 min. read

Honourable Peter David, who accepted a recent batch of Pfizer Covid-19 vaccines from the US Government on behalf of Grenada, described the initiative as a clear indication of the healthy relationship the country currently shares with the US Government.

“The donation of almost 100,000 vaccinations to the People of Grenada is not simply a gesture but a clear way of the United States helping us with our economic development.” David spoke during a handing over ceremony at the Maurice Bishop International Airport (MBIA). Earlier in the year, almost 30,000 vaccines were donated, and the donation on 15 December was approximately 70,000.

Pointing out that Covid-19 has had a devasting effect on all, David is of the opinion that vaccination is the only solution to solving the pandemic. “The effects are not only on the lives of the families who have died but on the economy and our livelihoods, and it is universally accepted that the easiest and most available solution is vaccination,” he said.

Dr Shawn Charles, Permanent Secretary in the Ministry of Health said this second donation will allow Grenada to be in a very favorable position as the Ministry continues its response against Covid-19. “As we look to the future with the emergence of other worrying variants this is a significant boost to the health security of Grenada and it goes a long way towards ensuring that everyone is protected.”

“Everyone at the end is protected in some way, either by the direct protection received by those who received the vaccine and the herd protection that is gained when we have a significant number of persons who are vaccinated in the community,” Dr Charles said.

David Schnier Deputy Chief of Mission at the US Embassy to Barbados described the donation as a true symbol of the friendship between Grenada and the USA. “This is a true symbol of our friendship, a concrete symbol of our partnership because we are all in this together. Too many Grenadians have died here, in the United States and all around the world,” he said.

“No one is safe until everyone is safe. So, it is the determination of the Biden Administration to share our vaccines with the people of Grenada and the people all around the world through the COVAX mechanism and bilaterally,” Schnier said at the ceremony.

Because of the donation, Grenada can now vaccinate all of the remaining eligible citizens and give booster shots with the Pfizer vaccines, marketed under the brand name Comirnaty.

NOW Grenada is not responsible for the opinions, statements or media content presented by contributors. In case of abuse, click here to report.
Tags: comirnatycoronaviruscovid-19david schnierlinda strakerpeter davidpfizershawn charlesvaccines
Next Post