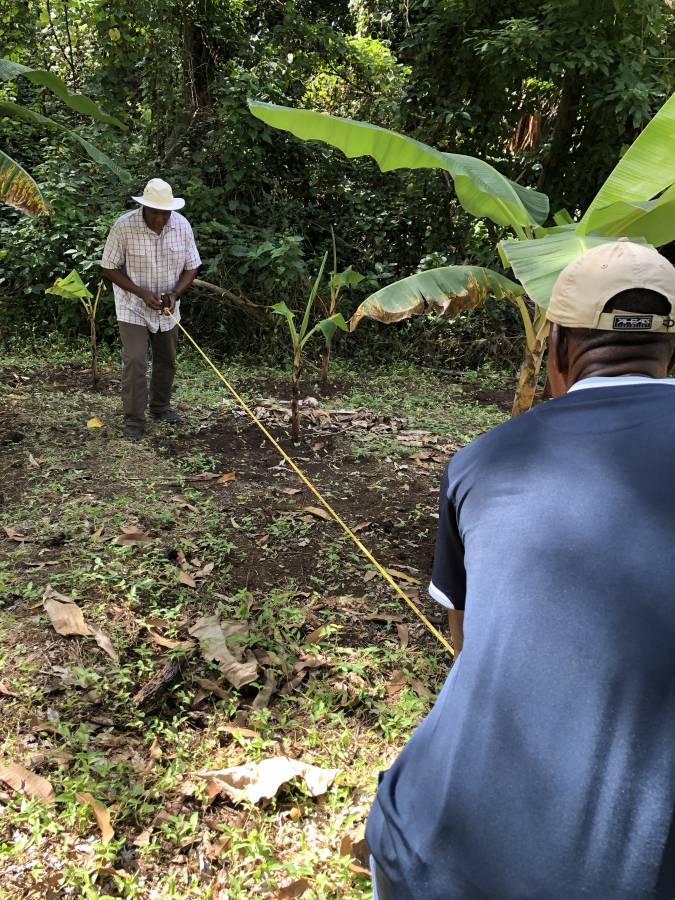 The recurrence of water scarcity during the dry season and flooding during the rainy season has long been an issue plaguing farmers in the big parish, especially for coastal communities surrounding the Grenville Bay area in St Andrew.

Farmers higher inland continue to feel the effects as floodwater during the rainy season leaves farmers defenceless against soil erosion while water shortage threatens food security in the big parish once known as a breadbasket of the island.

In this regard, The Nature Conservancy (TNC), an environmental organisation based in Old Fort Road, St George’s, has implemented strategic measures in the upland farming areas in order to reduce flood risk in the Grenville Bay area. Through a project called “Building community resilience to reduce flood risk in Grenada” farmers in the areas of Marquis, De Blandeau, La Digue, Harford, and areas surrounding Grenville Bay are currently being mobilised to implement the project that seeks to construct 5,000-gallon water catchment ponds in the upland areas that will store large amounts of water for irrigation and to plant stabilising vegetation along riverbanks to slow down the volume of water, therefore, reducing erosion and flooding.

The project is also assisting with the refurbishment of a dam in the La Digue area, which serves 17 farmers. This dam is constantly blocked, and the project is planning to implement erosion control interventions to get it back to full capacity. It is hoped that these interventions will reduce the risk of flood events affecting downland coastal communities and, with the establishment of the water catchment ponds, farmers will have water storage facilities during the dry season.

Support for this project comes by way of a wider regional initiative called “Karayib Klima”, a Unite Caribbean project funded by the French Ministry of Europe and Foreign Affairs, the Agency for Ecological Transition (ADEME), and Fondation de France.

For the last 35 years, Atkinson Felix, a vegetable farmer in the Harford Village area, has experienced severe flooding during the rainy season but on the flip side has incurred major losses of his produce due to water shortages during the dry season.

Felix says the implementation of the project will help to provide some sort of relief. “I have a serious problem with erosion because my land is connected to the public main road and there is an outlet from the public main road that carries water from there into my land that creates a lot of sliding and erosion. Now if and when the project comes through, it will not only prevent the flooding but in times of dry season I can have water stored to irrigate my plants and by so doing my production will be increased.”

For Finbar Hopkin, a farmer of La Digue in St Andrew, interventions to prevent water shortage during the dry season is urgently needed.

As a founding member of the La Digue Farmers Cooperative Group, Hopkin alongside several other farmers grouped to address water shortage in the past by constructing 2 dams to capture rainwater for irrigation purposes. The dams were expected to service the farmers in lower areas of La Digue, Union, and Richmond, however, while achieving moderate success, farmers quickly realised that the water captured was still inadequate and felt that more should be done. The larger dam is also constantly being blocked up by debris caused by floodwater during the rainy season. This is the dam that the project plans to refurbish.

Hopkin hopes that with these interventions, farmers can get some sort of relief. “Where the water originates, from there to the dam there is always erosion taking place so whenever heavy rains fall you find the dam just filled with silt so that created a serious problem for us with that dam so we are looking at the possibility of trapping that water from the source,” he said.

Two other farmers, Samuel Andrew and Kobe Williams, are also expected to yield tremendous benefits from this initiative.

Meanwhile, Project Manager, Andre Joseph-Witzig of The Nature Conservancy, continues to lead the consultative process with farmers and stakeholders which began last year and is expected to continue this year as the project moves into high gear.