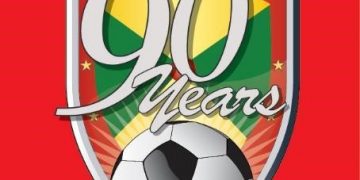 Message from GFA President on occasion of International Women’s Day

Message from GFA President on occasion of International Women’s Day

The theme for International Women’s Day 2022 (IWD 2022) is “Gender equality today for a sustainable tomorrow.”

This theme recognises the contributions of women and girls around the world who are leading the charge in various facets, of which football is not excluded.

As we reflect on the origin of the Women’s game, we note the struggles they endured in order to get acceptance. Although the game was as popular as the men’s version, the playing of football was banned, citing it was too dangerous for women.

Back in 1881, women playing the sport had to wear corsets, everyday heeled boots and even bonnets, so they weren’t considered to be breaking the Victorian standards of decency. This made it very difficult to move freely!

Here in Grenada, organised female matches did not happen until the early 2000s, under 21 years ago. We salute those who pioneered the evolution of Women’s football in Grenada.

With that, the Grenada Football Association is confident that our Women’s programme is headed in the right direction and emphasis must be placed on attracting increased involvement of women and girls in all aspects of the game. To date, our Women’s programme focused heavily on building capacity, football competitions and national teams’ programmes.

Going forward, this needs to be expanded to include scholarships, international experience and professional recruitment and contracts.

Last year, our U20 Girls participated in the Concacaf Qualifiers staged in Curacao. Although their participation was affected by Covid-19 during preparations as well as the composition of the squad chosen to represent us, which ultimately impacted on our performance during these games, their presence was nevertheless felt and recognised.

The Women’s Committee must be commended for the various competitions staged locally and recognition must also be given to the various champions of these competitions including Boca Juniors who won the “seven a side tournament” as well as Paradise FC, who won the “U17 Girls tournament” during the last year. Commendation must also be given to all other teams who participated in these tournaments.

We encourage all our clubs to pursue engaging girls into programmes organised by their respective organisations. This we believe will help expand on the women’s game here in Grenada which is an important aspect in the development of football. For as this year’s International Women’s Day theme from the Caribbean Football Union says, #girlsplayfootball — (let’s) Break the Bias.

NOW Grenada is not responsible for the opinions, statements or media content presented by contributors. In case of abuse, click here to report.
Tags: caribbean football unioncheney josephgfainternational women's day
Next Post

CARIBEWAVE 2022 to be staged on Thursday, 10 March