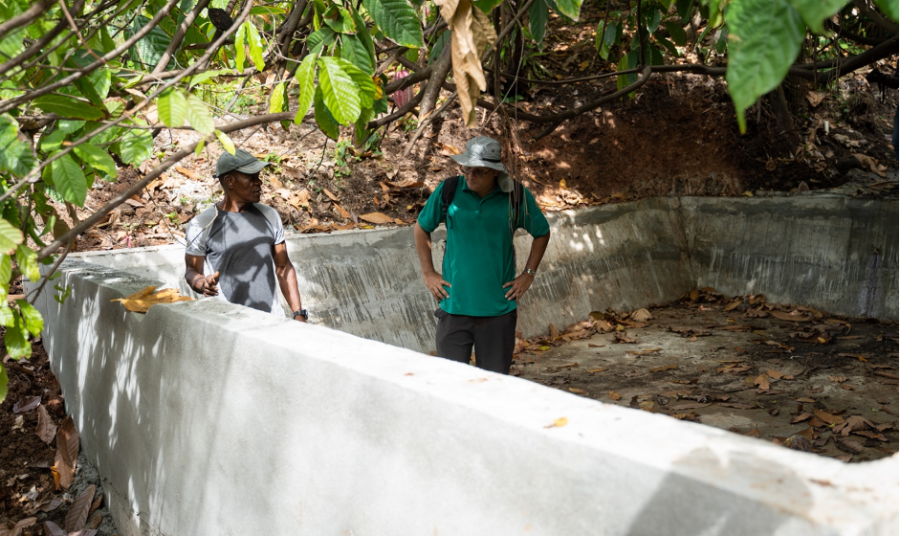 The Nature Conservancy (TNC) has enhanced the water storage capabilities of rural farmers in the Grenville Bay area, increasing their ability to withstand water scarcity in the dry season and sporadic flooding during the rainy season.

Over the last 6 weeks, a TNC-led project called “Building community resilience to reduce flood risk in Grenada” saw a concrete catchment pond constructed in Harford with the capacity to hold over 9,000 gallons of rainwater. Additionally, a dam in La Digue that services over 17 farmers and other community members in the surrounding areas was refurbished.

The completion of this project is a win for farmers and the lower-lying coastal communities in Telescope, Grenville, Soubise and Marquis, who will benefit from the reduced volume of water flowing downstream which frequently causes flooding and property damage during the rainy season.

Atkinson Felix of Harford Village is one of the farmers elated over the completion of the project. He recalled that prior to the intervention by TNC, his farm experienced 2 extremes — severe flooding in the rainy season and drought-like conditions during the dry season — which often resulted in the need to replant his entire field. “I am eagerly looking forward to seeing the benefits that will be derived from that [water catchment pond] …because normally around this time of the year does be my most challenging time in terms of water availability,” Felix said.

“Sometimes I have to resort to using water from Nawasa which can be very costly, but now that this system has been erected here, I am hopeful that it will be effective and I will be able to do much better in my farming. I expect that my production will be increased,” he added.

Further inland at La Digue, Finbar Hopkin, the founding member of the La Digue Farmers Cooperative Group, is grateful for the assistance given by TNC, to address the challenges experienced as a result of the continuous blockage of a dam previously built by the association to address water shortages.

This dam was supposed to service farmers and other community members in the lower areas of La Digue, Union and Richmond, but upon completion in 2004, the farmers quickly realised that severe erosion was causing the chamber to continuously fill with sediment, which greatly reduced its water storage capacity and clogged the pipes leading to the various farms. This essentially rendered the dam useless and required expensive maintenance. As part of the project, an area above the dam was excavated to accommodate a new chamber which was built with 6” hollow concrete blocks and reinforced with steel. This new chamber is meant to serve as a sediment trap that will prevent silt from entering the main water catchment area. Additionally, an outlet pipe was installed at the bottom of the chamber to make it easier to clean out accumulated silt and debris.

When Hopkin visited the site where construction of the newly refurbished dam was near completion, he was impressed with what he saw. He applauded TNC for their involvement in making this a reality. Furthermore, he was quite pleased to have been involved in the project through the input he provided into the planning and execution process for the refurbishment of the dam. “I am satisfied with the manner in which the organisation [TNC] went through this whole process. As a matter of fact, you can see the dynamism in the way in which they operated in terms of their professionalism,” Hopkin said.

To increase the effectiveness of the project, TNC also worked with a number of community members from Telescope and Soubise to plant 5,000 slips of vetiver grass along riverbanks and slopes throughout the Grenville Bay area. The roots of this particular plant are extremely effective at binding soil together, creating ideal conditions for reducing riverbank erosion, which improves the overall water quality in rivers and further downstream in Grenville Bay.

Prior to the start of the project, The Nature Conservancy (TNC) relied heavily on the development of flood risk models using local rainfall, elevation, and other relevant data collected from local government agencies including the Ministry of Agriculture, Lands and Forestry; Ministry of Infrastructure Development, Transport and Implementation; Land Use Division; Nawasa and the Metrological Office. These models were instrumental in identifying the priority areas where nature-based solutions were implemented.

This project — part of a wider regional initiative called “Karayib Klima”, a Unite Caribbean project funded by the French Ministry of Europe and Foreign Affairs, the Agency for Ecological Transition (ADEME), and Fondation de France — is one of many that TNC is implementing in the Grenville Bay area. Other projects include the construction of a fisher facility in Soubise, and shoreline stabilisation works in Telescope, Marquis and Soubise.