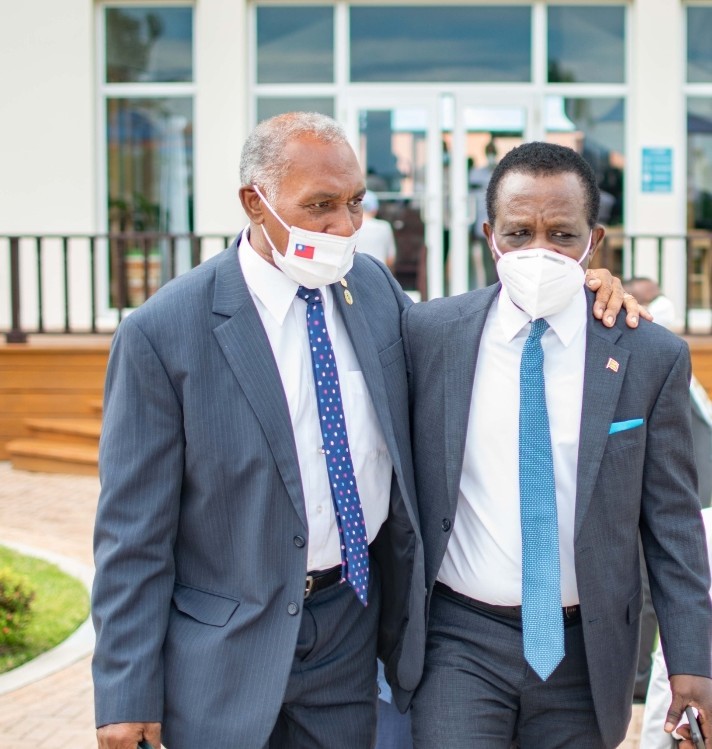 Dr the Right Honourable Keith Mitchell, and Vance Amory of St Kitts and Nevis, during the recent Caricom Heads of Government meeting in Belize
Share

Grenada’s Prime Minister and Chairman of the OECS Authority, Dr the Right Honourable Keith Mitchell, has extended condolences to the Government and people of St Kitts and Nevis and the family of the late Vance Amory, following his sudden passing over the weekend.

Amory, a former Premier of Nevis, was serving as an ambassador at the time of his death. Dr Mitchell last interacted with Ambassador Amory at the Caricom Heads of Government meeting in Belize, in early March.

Paying tribute to the deceased, Dr Mitchell said, “Vance gave yeoman service to his country and people. He was very passionate about the development of Nevis and accomplished much during his years of service. In his most recent capacity, Vance continued to represent his country at the highest level, and would long be remembered for his valuable contributions to discussions on regional developments at both the OECS and Caricom levels.”

Although they served long years as politicians in their respective countries, the relationship between Dr Mitchell and Ambassador Amory started long before they entered the political arena and extended way beyond political discourse.

Dr Mitchell explained that he first met Vance in the late 1960s when they were members of the Combined Islands Cricket Team.

The Prime Minister recalled, “Whenever he greeted me, he called me ‘skipper’ because when we first met, I was the captain of the Combined Islands cricket team and he was the opening batsman. We attended UWI Cave Hill together and again played for the UWI cricket team which I also captained. So, we have this long history of sports, academics and politics and the relationship was sustained over many years. I will certainly miss our very engaging discussions which invariably always touched on the game we both loved. Vance will be missed and I pray that he finds eternal rest and that his family is comforted during this time of grief.”

NOW Grenada is not responsible for the opinions, statements or media content presented by contributors. In case of abuse, click here to report.
Tags: caricomkeith mitchelloecsst kitts and nevisvance amory
Next Post