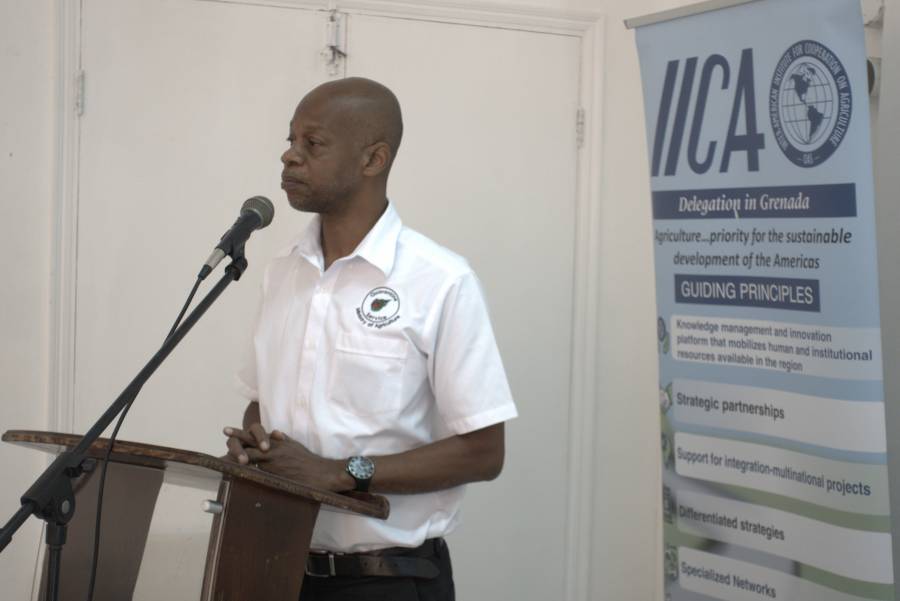 Grenada has evaluated its safeguard systems through its analysis of the National Emergency Response Plan (ERP) that deals with the Tomato Leaf Miner or Tuta Absoluta.

Extension and Plant Quarantine Officers, representatives of the seaport and airport authorities, farmers and others recently participated in a tabletop simulation exercise, to identify gaps and possible action for response to an incursion by Tomato Leaf Miner, should the pest be identified here. “This is a plant quarantine pest; the main host is tomatoes. It damages the leaves, fruits, and stems, but related plants of the Solanaceae can also be affected,” explained Pest Management Officer Thaddeus Peters.

The exercise, which was organised by the Pest Management Unit (PMU), falls under the Greater Caribbean Safeguarding Initiative (GCSI) project, implemented by the Inter-American Institute for Cooperation on Agriculture (IICA).

IICA’s National Specialist Derek Charles, spoke of the significant role that the exercise can play in helping to protect agricultural outputs and commodities, ensuring that crops can thrive in an environment that is free of pests and diseases. “Awareness at this point is critical; we need to be aware of certain species like the Leaf Miner that causes major damage to the sector and keep it away from our shores. The exercise will help us to prepare and activate a full-scale response should pests like these, which can cause major damage to the agriculture sector, reach our shores.”

Grenada’s simulation exercise follows similar exercises in Dominica, St Lucia, and other Caribbean Countries that have not recorded any cases of the pest. Officials here, however, will be increasing awareness and education on the Tuta Absoluta.

The pest has been identified in Haiti, which has been added to the list of countries that the Animal and Plant Inspection Service (APHIS) has identified to be infested by tomato leaf miner and which has market access for tomato into the United States.

Due to its high reproductive rate, all life stages can be found in the field once introduced and established. The larvae of insects that feed aggressively can cause highly damaging effects on tomatoes and other vegetables.

This project comes on the heels of 2 other regional initiatives. The Don’t Pack a Pest, is a signage project designed to raise public awareness regarding the risks associated with passengers potentially introducing pests and disease by carrying agricultural and food items when travelling. The second initiative is Preventing Costs of Invasive Alien Species (IAS) in Barbados and countries of the OECS. This is funded by the Centre for Agriculture and Biosciences International (CABI) and implemented by IICA.

NOW Grenada is not responsible for the opinions, statements or media content presented by contributors. In case of abuse, click here to report.
Tags: cabicentre for agriculture and biosciences internationalderek charlesgisgreater caribbean safeguarding initiativeiicainter-american institute for cooperation on agriculturepest management unitthaddeus peterstomato leaf miner
Next Post